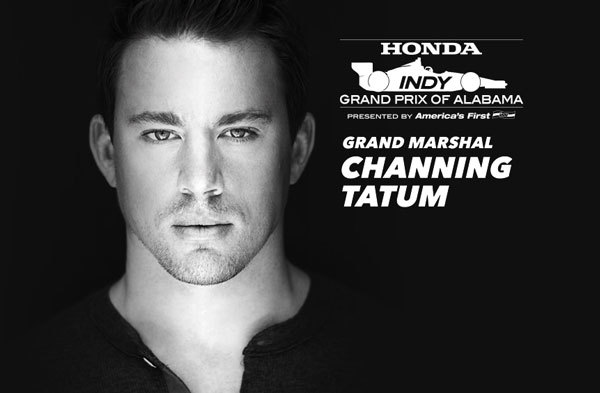 Posted at 19:37h in Honda Indy Grand Prix of Alabama News by bell

“We are honored to have a world-class actor and Alabama native as our race Grand Marshal,” stated George Dennis, president of ZOOM Motorsports, the exclusive event promoter of the Barber Motorsports Park. “Channing’s energy for racing is a perfect addition to a fun-filled weekend, and we’re excited for what is shaping up to be the best Honda Indy Grand Prix of Alabama yet.”

Tatum began his acting career in 2004 and has gone on to produce and star in franchises including the Jump Street and Magic Mike films. He has starred in films including Foxcatcher, Hail, Caesar!, Hateful 8, The Vow, among others. He has also ventured into other businesses including producing and co-directing Magic Mike Live at the Hard Rock Hotel in Las Vegas and creating Born and Bred Vodka in a partnership with the Grand Teton Distillery.

“I’m honored to be serving as the Grand Marshal for the Honda Indy Grand Prix of Alabama,” stated Tatum. “I have always loved the excitement of a great race and it’s a privilege to be back in my home state for this event.”

Additionally, Tatum will get the ride of his life in Honda’s Fastest Seat in Sports; a specialty-built two-seat Indy car that will lead the start of the Verizon IndyCar Series race with American racer Arie Luyendyk Jr.

For additional information, fans can visit www.barberracingevents.com for more information or to purchase their tickets online today.